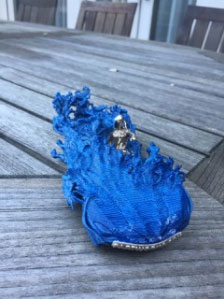 By day, Scott works with a team of SOLIDWORKS engineers and runs his own company called PartWorks that helps companies outsource their laser scanning/CMM, reverse engineering and design for tooling and metal or plastic parts.

By night, Scott has an active social life, he often hangs out with his 10 year old son; Scouting which has become a big part of their lives over the past few years.  They also made a 3d printed Pinewood Derby car last year (see photo its super is cool).  And if that’s not enough, as keen guitarist; “I also play lead guitar and try to play out once in a while to keep up my chops.”

The group meets quarterly with a typical attendance of 20-25 people, these groups have provided Scott with ample knowledge and understanding of a wide variety of companies and applications for SOLIDWORKS in the Atlanta South region that he ordinarily wouldn’t have never have known about.

When asked what the best meeting they have had was, Scott described a time where they held a meeting at BEKO a compressed air component manufacturer that uses SOLIDWORKS where they were treated to an interesting plant tour. An engineer from a local reseller; Trimech, presented on Simulation Tools in SOLIDWORKS. Followed by a FIRST robotics team who presented their design approach using SOLIDWORKS, the team consisted of high school students competing in a FIRST Robotics Competition otherwise known as the “the ultimate Sport for the Mind” and “the hardest fun you’ll ever have”. Scott was thrilled to “see high school students so passionate about design and engineering!” 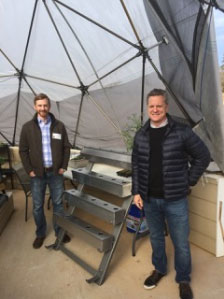 Surprisingly, Scott isn’t a SOLIDWORKS user himself, which proves that you don’t need to be a specialist to love the brand. His idol in the industry is Elton Musk “I think he will stand out as the most important entrepreneur in the past 100 years for his bold, futuristic, and successful ventures in electric vehicles, batteries, space exploration and solar.”

Why should you join a local user group meeting? Scott says: “SOLIDWORKS has a great community of users who are very generous with their time and skills to help others. It’s also a great place for employers and engineers looking for job opportunities.”